The culture surrounding band shirts is so fucking masturbatorial. I know this first hand, since I own roughly 20-30 of them. As someone who spends far too much time obsessing over both music and sports, I can’t help but notice the similar satisfaction each respective fan base takes in showing off how passionate with specific articles of clothing. For sports fans, it’s a jersey. For music fans, it’s a band shirt. I’ve seen 20 minute long interactions heavy on mutual admiration over both of these items at a game or a concert countless times. It’s like a secret handshake for these people.

Again, I am part of this very snobbish problem. I proudly trot out my Darko Milicic jersey as often as possible in public. People need to know that I know about the Human Victory Cigar. And as a teen, I found a rinky dink website that allowed me to slap a .jpg of a Simpsonized Sonic Youth onto a t-shirt that they then gladly pressed for me. Nothing gives me greater satisfaction than when somebody jealously squees “where did you get that?!?!” at me. Might be why all my relationships never last over a month, who knows.

Because this is the type of monster I am, my standards for this subset of fashion is absurdly high. Specifically band tees, since they’re the more commonly worn item. Some are perfect. Others are probably more useful as food for fire. Others, however, reach a rare air of ubiquity that transcend music taste altogether. The design strikes such a cord that people who might not have ever heard a song by a band will proudly wear the shirt.

Whether or not that’s a bad thing is an entirely different discussion that really only means anything to the most annoying realms of my personality. What I want to try to figure out is how many of these iconic shirts are actually worth the hubbub from a design standpoint. Are these shirts worth their hype? Well, let me put my Hat of Objective Judgement on and discuss. What a rebel! Boy, oh boy, Johnny Cash was sure a troublemaker back in his day, wasn’t he? A middle finger? My word, what a provocateur! The sheer amount of rebellion it takes to pose in front of a camera with all but Mr. Middle Finger (the most important of all fingers) folded down is unheard of. Not enough artists flip off photographers nowadays! That’s what’s wrong with today’s music. Man, we need more dirtbags like Johnny around, man. Ugh, I’m done pretending that this shirt is cool in any way or that Johnny Cash makes enjoyable music.

NOT WORTH THE HYPE.

While there’ve been a myriad of spins on the original design recently, from Wu-Tang to Mickey Mouse, oddly enough, nothing can beat the original. It’s a beautifully simplistic design that’s gotten more and more popular over the years. I can never see myself getting tired of seeing it.

Considering that the breed of YouTube commenter most likely to post a homophobic slur on a Justin Bieber video tends to have a Heavy Metal album cover as their their picture, it tickled me beyond belief when the Beebz started incorporating those bands’ shirts into his daily fashion. Metallica, Slayer, Iron Maiden, all of them Biebered. He even copied Iron Maiden’s font for his latest tour’s merch. The trend’s caught on like wildfire. These shirts are all over places like Urban Outfitters and H&M now. It’s kind of impossible to explain exactly how or why it happened, but I’m so over the moon with the fact that it did. Look at this stupid fucking logo. This dumb, overly glossy piece of pop-art trash is going to wind up outliving each member of the Rolling Stones themselves. It remains a mystery to me why anyone would want to have some hornily panting tongue smack dab on the middle of their chest, but this is the America that we live in today.

NOT WORTH THE HYPE

Even more than the Unknown Pleasures tee, this one has had so many parodies to it. And it’s more minimal than Joy Division’s design, too! It’s just the band’s name with a bunch of skinny rectangles sloppily lined up. There’s no reason why this should be so exceptional, but it is. It’s basically the shirt every Punk band wishes they could call their own.

6) Pink Floyd’s Dark Side Of The Moon

Listen, I don’t really want to spend too much time on this one. It’s fine, okay? I get it, rainbow on one end, no rainbow on the other. Very symbolic. Is symbolic the right word to use there? I really don’t care enough. For me, this shirt screams ‘Guy In His 40s Who Buys All His Graphic Tees At The Gap’.

For some odd reason, Run-DMC is one of the few rap outfits that currently have a truly exception shirt to call their own. I’m not really sure why that’s been the case, but considering how awesome the merch from guys like Kanye, Drake and Tyler, The Creator have looked the past few years, that should be changing real soon. For now, though, this one remains the genre’s gold standard. 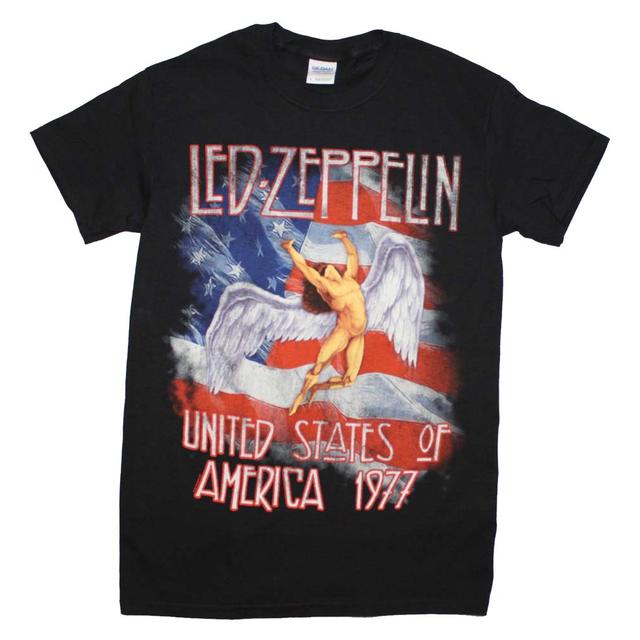 Something about a naked angel who appears to be writhing in agony just seems to resonate with a bunch of folks. Whenever I see this dumb angel, I just want to shout “GET OVER IT, STUPID ANGEL!!!” at it. Then I realize I’d be shouting this at someone’s chest and that isn’t really cool. The odd thing is, I do get it on some strange level. Like, when I see this angel being all histrionic, it does sort of epitomize the bombast of Led Zeppelin’s music. No part of me ever wants to wear this shirt, but I understand the appeal.

MEDIOCRE ENOUGH TO BE WORTHY OF SOME HYPE

Years before I heard a single note come out of Glenn Danzig’s mouth, I was introduced to this shirt. I had no idea if Misfits was a band, a clothing brand, or some horror movie I’ve never seen before. The imagery always stuck with me, though. Once I finally started listening to this legendary band, I was obviously more than pleased, but I still think what Misfits is most known for is this fucking shirt. It’s amazing. I honestly wouldn’t be surprised if this shirt’s outsold their entire catalogue 10 times over. Everybody has this shirt. And with good reason, too.

Aaaaand that’ll be it for this installment of ‘Is This Band Shirt Worth The Hype?’ As you can see, the color black reigns supreme in the iconic band shirt world. Or maybe it doesn’t, and that’s simply a byproduct of my darkness bias coming through. There were a few other shirts I was considering adding to this list, but no other seemed as much of a no-brainer as these did. Perhaps a sequel is in order.

Since their early days, the Portland based band Blind Pilot has been a band without huge recognition. I told my friend that I was writing a piece on Blind Pilot and she thought I meant the 90’s band that sings “No Rain.” I can’t blame her for thinking that, her life is pretty plain.

When I got assigned to do this article, I got really excited because I was a fan of Blind Pilot in high school. My crush at the time told me to listen to “3 Rounds and A Sound” and I was immediately hooked. The song is a beautiful ballad recalling a relationship and a couple’s “song.” I downloaded their first album, of the same name, and it was amazing. Their first album was a great first, it was solid and strong and kept the same sorrowful themes throughout.

3 Rounds and A Sound is a great sentimental piece with songs about love and heartbreak, as are  many of their songs like “Poor Boy,” “Oviedo” and “The Story I Heard.” Blind Pilot’s music could be categorized as indie-folk, with its blend of soft vocals and acoustic sounds. Their music is reminiscent of a relaxing afternoon spent with someone you love.

Their last album, We Are The Tide, is no different. It keeps the same soft and mellow charm that made their first album so memorable. Songs like “White Apple” will have you feeling some form of delayed teenage angst and will leave you missing your old high school crush that is now engaged, or maybe that’s just me.

Bling Pilot’s music is one that will sound very familiar to you and that is because it is featured in many mainstream television shows. Shows like One Tree Hil, Private Practice and Chuck. The reason for this is that their music is very gentle and evocative of melancholy emotions.

Although Blind Pilot has not put out any new music recently, they’ve been working non-stop. They are currently touring with Vance Joy as part of their 2016 tour. Blind Pilot has also been allegedly working on a new album since the end of last year. I hope we get to hear some more of their sweet easy going sounds soon.

It takes serious dedication to go see live music in 2015.

If you’re anything like me, you’ve spent a disproportionate amount of time and energy scouring the interwebz for upcoming gigs in your locality, only to realize you’ve already missed the boat.  That band who’s killer new record just dropped last week–that’s been on constant repeat on your Walkman–has already finished their encore, packed it in, and moved on to their next tour stop.  Guess you’ll have the catch them the next time they come around…

Alright, come on.  Cheer up.

Songkick has been helping devoted concert goers track their favorite artists and snag tickets to upcoming shows since 2007.  The start-up was founded by a group of tech-minded music nerds in London’s so-called Silicon Roundabout.  The company has quickly grown to become the second largest e-ticket vendor behind Ticketmaster. Using it’s expansive database of over 2,000,000 artists, Songkick automatically generates a feed of recommended gigs based on the artists on your device’s Spotify, and the ones you’ve liked on Facebook. Notifications are sent to you via email the moment tickets go on sale, so don’t wait!